Sunday, September 26
An absolutely perfect day for a walk along the North River Trail, an extreme contrast to the previous weekend.
However due to the rainfall over the last few days a decision was made by the walk leader (Rollie) and the walk event sweep (Carmel) that we would only go as far as the Salmon Pools near the former MacLennan homestead for a return trip of 10k's.
Anyone wanting to go further up river to the falls were on their own!!!
On the previous trip to the falls each of of us had had a fall, so it was better to enjoy a Safer walk then to worry about a participant getting hurt.
The trail past this former settlement is much less developed, with 6 brook crossings (no bridges) and at least 8 dead fall trees to go around including a rocky cliff area that is quite wet and slippery.
The participants agreed to continue only to the 5k turn around point.
We had an excellent and enjoyable walk event, though the trail was very wet in most area but with a nice bright sunshiny day we arrived at the salmon pools, where we were able to watch the fishermen casting in the pools; this made the trip that much more enjoyable. 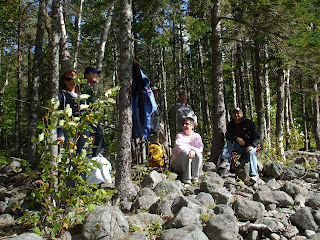 Taking a break near the Salmon Pools and watching the fisherman on the opposite shore. 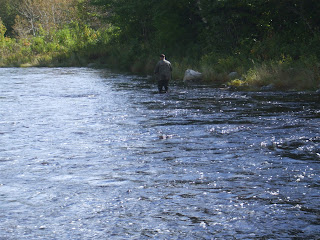 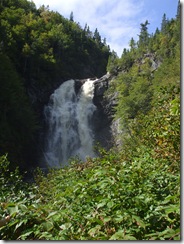 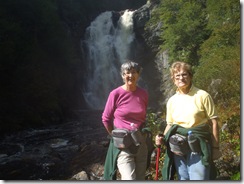 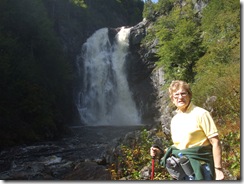 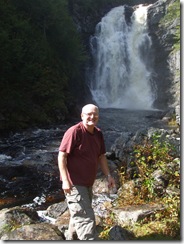 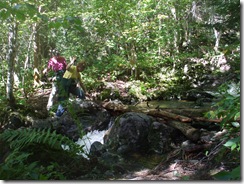 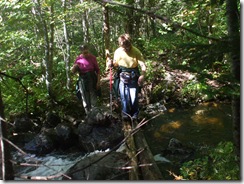 Crossing one of 6 brooks that intersect with the trail along the river.
These small brooks are now rivers and many of the bridges have been washed away with spring break up and the heavy rains we have had this past month (September)!
The 2010 walk schedule has rated this trail as 2B THIS IS AN ERROR, The North River Trail should be rated  4D
Posted by Phyllis at 9/19/2010 10:43:00 pm No comments: